Today's Show was pre-recorded... Cause Lisa is in Dallas (which is why we played Big D from "Most Happy Fella"). We had 3 segments

First we went to a rehearsal of Austin Playhouse's production of "Jacques Brel is Alive and Well and Living in Paris" which is playing now through June 27th. The music can only be described as enchanting (ok, Stuart might say 'Darling,' but you get the picture)

Finally ComedySportz at Cafe Caffine.. Every Friday and Saturday night... it is fun AND family friendly. Definitle a must for the whole family.... yep!


Listen to it here: Listen to the show (Right click to save)
Posted by Off Stage and On the Air at 12:30 PM No comments:

On today's show we had

1. Amanda from Theatre Action Project which engages youth to solve real world problems through art. She talked about the Youth Arts Festival happening this Saturday at the Boyd Vance Theatre in the Carver Museum. Stuart and I went out to Manor New Tech High School on Monday and interviewed some students and their teach about a mural they are putting up on a wall in the school. 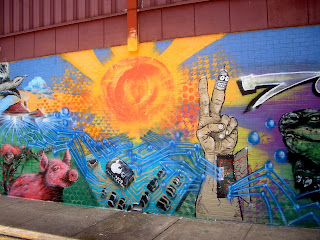 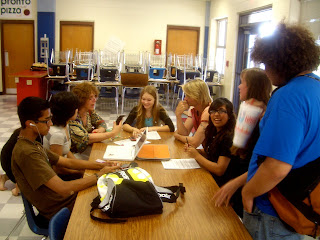 We also had David Yeakle,Justin Sherburn and Leah Lovise from the Tongue and Groove Theatre's production of The Red Balloon which opens tomorrow at the Rollins Stage of The Long Center.

We had fun (as usual)

First of all, let me say that i know i need to update this site... put pictures of Stuart and I up and generally be more like someone in the 1990's.... Get off my back! I'll do it soon (just kidding).

On Today's show we had three wonderful guests

First, we had Joey Banks and Gwen Kelso who play Lysander and Helena (respectively) in Austin Shakespeare Festival's A Midsummer’s Night Dreamas well as managing director Alex Alford. It is playing at the Zilker Hillside Theatre.. But this is a Midsummer with a 60’s rock and roll twist. Make sure you check it out... (hint: It's FREE)

Second, we had Jim Caruso joining by phone. He and Billy Stritch are bringing "Cast Party" back to Austin. They will be at the Long Center on May 20 and 21. (Buy tickets... or else!!)It is a wildly popular weekly soiree that brings a sprinkling of Broadway glitz and urbane wit to the legendary Birdland in New York City every Monday night. It's a cool cabaret night-out enlivened by a hilariously impromptu variety show. Showbiz superstars hit the stage alongside up-and-comers, serving up jaw-dropping music and general razzle-dazzle. Austin Cabaret Theatre (WHO?) will be presenting cast party at the Long Center on May 20, 21.

Finally, two cast members from the Broadway tour of "Chorus Line"; Venny Carranza, the Dance Captain and Heather Duckworth who plays Judy were in studio to talk about the show and life in the theatre and rocket science (not kidding). A Chorus Line is playing at Bass Concert Hall Through this Sunday! It is a singular sensation!

We had a great show once again!!

My my my! Today was the first show of Season Three and our first 'official' hour-long show. And we are on a new day... Wednesdays from 1:30 to 2:30. We will be changing up our format a bit, but what will remain the same (or get better) is the fun quotient! Boy, do we have fun!

Our first guest was Andy Berkovski, Artistic Director of The City Theatre. He talked about the controversy involving the show, "The Most Fabulous Story Ever Told" which will be opening in June. But don't forget to see his current hit "Agnes of God" it got great reviews.

Next we had Susie Gidseg and Brown co-founders of The Vestige Group along with Director, Bastion Carboni. They were talking about their production of "Bash: Latter-Day Plays" ,Written by critically-acclaimed American playwright Neil LaBute. They also filled us in on their plans for this season (their fifth). Jen performed an excerpt from one of the pieces... very powerful stuff.

And finally we had our friends from Texarts on. Co-founder Robin Lewis along with two performers; Austin veteran, Selina Rosanbaum and 14 year old theatre student, Holly Gibson. Holly and Selena each performed a song.. WOW!

Get us in your email

Off Stage and On The Air focuses on theatre around the country, the world and in our hometown of Austin, TX. We focus on things happening around town as well as chatting about things going on in New York, London or wherever the Theatrical Action is!!!

Lisa Scheps, Nicole Shiro and Nick Mayo have nothing but fun... you will too.